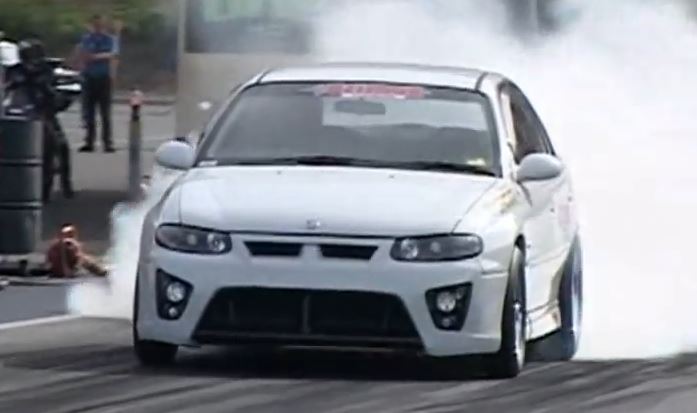 This article's primary aim is to share information with people planning to race in bracket racing with a VT-VZ Commodore. It is hoped that it might inspire more people to get involved in the "sport" of drag racing.

Straight out drag racing has few close races, most often cars are clear winners over the 1/4 mile or one driver gets a better start and the cars may be equally matched but still be not anywhere near each other at the end.  This is because at 180kph the cars are doing about 50m per second, so even 0.1s is a 5m difference and thats more than the length of a car.  So the concept of handicapped starts can be introduced to make the races close. This introduces the "sport" of drag racing.

To create close racers drivers can "put their money where their mouth is" and nominate for each race just how fast their car is.   The catch is that if the driver is an "exaggerator" and nominates a fast time to impress the crowd, this will end in an easy victory for an opponent who is more accurate with their estimated "dial in" time (thats what its called).  For example if one racer we will name "Car A" nominates 12.00s and their car does 12.50  , the opposition "Car B" nominates 11.50s and  races to a time of 11.51s. What happens in the race is the green light for Car A happens 12.00-11.50 = 0.5s before Car B.  During the race Car B catches Car A mid race and overtakes racing to a win in 11.51s about 0.49s in front of Car A.   As explained earlier 0.49s at 180kph is around 24.5m in front and that is around 5 car lengths.   This loss was caused by the poorly predicted race time by the driver of Car A, if they had predicted that the car would run 12.50 this would have made the race finish result close to a dead heat.

Now on top of the result of the dial in accuracy, the other major factor in drag racing is the drivers reaction time at the start.  This is also compared driver to driver and is the domain of the best bracket racers, Without good reaction times and reaction time consistency, the racer will not be able to win a race meet no matter how good the car is.  Good racers will be aiming for reaction times around averaging near 0.070s , this is achievable with lots of practise and good technique in a street driven car that is launched off the footbrake.  Many people can race to consistent reaction times  of 0.170s or slower. This would mean they are in fact giving away 0.1s in 1/4 Mile Elapsed Time (ET) and that is a car length.  Often the slower reactors are under more pressure and make mistakes pushing the car harder at the end and guessing dial ins that the car may easily exceed.  (The racer is disqualified if they get a quicker ET  than their dial in or they red light by starting before the green). In one meet the USA Top Fuel Invasion in Dec 2005 I had reaction times of

The other factor that effects bracket racing results is the racers awareness of how the changing weather effects the car. With VT-VF Commodores & HSV racing in the 11-13s ET range, every degree the air that is actually induced varies in temperature (measured at the intake valve) as a result changes the power by around 1 rwkw. This means that every 7 degrees the car will change in its ET by 0.1s and be 1.1mph different in its speed at the end (Trap Speed).  Also as air pressure changes the car is effected in power, the higher the air pressure the faster the car. Humidity also effects the engines power.  The wind can change in its speed and have a bigger effect on the trap speed and an effect on ET.   The weather can also effect the grip the car will get off the line, the track is best when its had sun on it and is not too hot maybe ideal around 25 degrees for getting best launches in terms of traction.    When temperatures are well outside the normal ranges the racer needs to be aware that the car will behave in a healthy way, i have raced a LS1 in 45 degrees and it was ofcourse much slower than on a freaky good weather night with massive air pressure and 6 degrees C as well as a sunny day to warm the track. The difference between the two extremes may even approach 1.0s in ET. Its for this reason that dyno manufacturers build weather correction into the power figures that depend on air temp/air pressure/humidity.

A good car needs to be able to launch consistently the same and not be prone to "stuffing up" starts.  It needs to be easy for the driver to launch the same every time. My VE Twin Turbo wasn't the type of vehicle that could be launched the same each time and there was too much to think about to launch the car. A good car to race leaves the driver with nothing to think about other than the lights on the tree, the rpm for the launch and everything else needs to be non-visual.  The car needs to be able to run nicely in every run regardless of weather conditions.  A good car that is enjoyable to race needs to be easy to setup at the track and to take home if problems arise. Its best if its trailered to the track if possible for that reason, because then if something does go wrong, it can be transported home and parked until you get time for it be fixed.

To be an effective consistent racer you will need good habits to be developed. This entails identifying good habits and then practising doing them the same every time. Treat every race as if its the final of a big meet, even if its a qualifying round or a test and tune event or a off street meet. These habits need to extend to everything and not only the race itself, but also the burnout procedure, warmup procedure for the car, even the pre-race checks of the car.

The aim is to get the tyres to the best temperature for the rubber to work and launch the car consistently. Aim to get them hot from a high speed burnout in the dry beyond the water and one that is as short as possible to be effective. This needs to be determined from testing - so go to the test and tune meets when the track is properly prepared (often off street meets the track isn't fully prepared). The track is prepared by spraying it with a traction enhancing coating, if you ever walk on a prepared track the soles of your shoes will stick to the track like suction cups. Proper drag tyres either drag radials or slicks will be made very sticky by the burnout and at the right pressure  (which you need to determine by experimenting) will give the best launch.  One last tip is to take care with your limited-slip diff (LSD) by not letting the car have a chance to grab one tyre during or at the end of the burnout.  To do that keep the tyre speed high and back off once.

When racing get into stage first on one while light.  So don't stuff around doing fancy long burnouts. If you are the first racer in then you can settle yourself better. Edge in mm by mm to get the second white light. This is because your cars front tyre at that point has just started to block the beam, if you roll forward further eventually the tyre will stop blocking the beam. When this happens you will start the timer or you will get red light (if this happens before the green light on the tree).  This distance between the tyre starting the block the beam and not blocking the beam is called runout. Its effectively an opportunity for a "running start" so maximize its distance for a faster ET and also by being careful of your launch posiition on two white lights gives you better reaction time consistency because you are starting your launch at exactly the same position each time.  People who are sloppy at positioning their car at "staging" on two white light do not win race meets.

Another tip is to try using the handbrake at the start if in an auto. It helps to lock the car in position, keep the button pressed in the whole time and learn to coordinate the release.  If you are driving a manual it will be best to watch videos of similar cars launching to try out some strategies that work best for your car and your budget for launch parts. Automatics are far easier to launch, far more trouble free and more consistent than manuals. A good target for a 60 footer is 1.600 if you car is able to get under that its well setup and you are doing it right. Best possible with cars in the 11-13s range is a 1.500, at this point its likely pulling the front left tyre just off the ground and doing 0-100kph in the 2.8s range.

After two white lights are lit up, your car is in stage, once the other driver puts their car into stage with two white lights, the race organizers starter can press a button and  then there will be three amber lights that always turn on and off in the same time spacing of 0.5s each. You will need to test to find out where in the sequence you need to launch the car to get the best reaction time, sometimes this is for example when the last amber light comes on. In this moment if you blink you will probably spoil your reaction time by at least 0.1s and give the other racer a likely 1 car length advantage.

We had at one stage a street driven car that was consistently able to do within 0.030s of its "dial in"  and that is less than a third of one tenth of a second, a variable distance at the end of the strip of less than 2m. To get to this level of accuracy we needed to have collected a lot of data and had a well setup car.

Collect all your timeslips and record all the weather data you can for every run the car does. Keep other notes of everything from tyre pressures, track surface observations, fuel type etc. Record it all in a spreadsheet.

Learn to compare runs using Density Altitude Calculators so you can see a pattern of how the car performs in different weather conditions. An example is at http://wahiduddin.net/calc/calc_da.htm

Every race result has an element of skill which you can develop. It is also a solid percentage of luck. You will if you participate in bracket racing have luck fall your way which often will be a result of your opponents bad luck eg red light, breakage etc.  Enjoy your victories and draw whatever wisdom you can from your losses. Sometimes you can cut a 0.001 reaction and race within 0.050s of your dial in and still be beaten. Much of the time if you can react within 0.100s and race within 0.100s of your dial in you will win the race. So make that be your aim.

This article will be expanded and updated further.